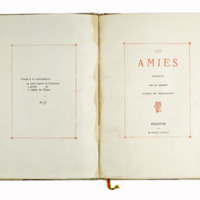 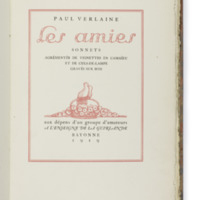 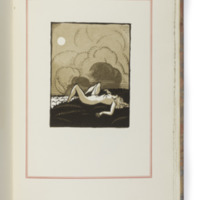 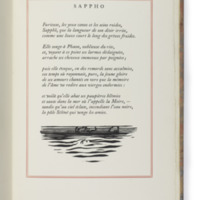 The collection of six Sapphic sonnets Les Amies [Girlfriends], composed by Paul Verlaine (1844-1896) under the pseudonym Pablo de Herlagnez, was clandestinely printed in Brussels by Poulet-Malassis in December 1867. Several copies of the booklet were seized by French customs while the publisher was trying to smuggle them into Paris at the beginning of 1868, and the Tribunal Correctionnel (Criminal Court) of Lille ordered the destruction of the collection, on May 6, 1868, for affront to religion and public decency (see the September 19 issue of Le Moniteur universel. Journal official de l’Empire français). The collection Les Amies was anonymously illustrated and reissued by the artist and art publisher Jean Gabriel Daragnès (1886-1950) in 1919. The poem “Sappho,” exhibited here and translated by Samuel N. Rosenberg, has the particularity of being an inverted sonnet, that is, a pseudo-sonnet, exclusively composed of feminine rhymes like the other sonnets of the volume, in which the order of the quatrains and the tercets is reversed, to underline the lesbian theme of the collection.